The 7 Deadly Sins of Advertising

I had an advertising design professor in college who used to say that 90% of advertising is a worthless waste of money, space and time; 9% gets attention, but fails to persuade; and less than 1% is effective. Much of our time in his class was spent working on die-marker comps of various ad concept assignments. On critique days, he would pin our concepts in front of the class on a large bulletin board. Then, he would walk down the row of comps and deliver brutal feedback.

I’ll never forget the day that he stopped on my comp, stared at it silently for a few seconds, tore it off the board, and proceeded to stand on it while he critiqued the next comp. Apparently, I had committed one or more of the following unpardonables:

SIN #1: Spreading It Too Thick – One of the quickest ways to do more harm than good with advertising is to make an unbelievable or incredible claim in your headline. Consumers aren’t idiots. They recognize spin. In fact, they coined the term. Don’t try to create demand with outrageous claims or unrealistic positioning. Get past the BS and help me believe your unique selling proposition.

One of my favorite BS ad examples… 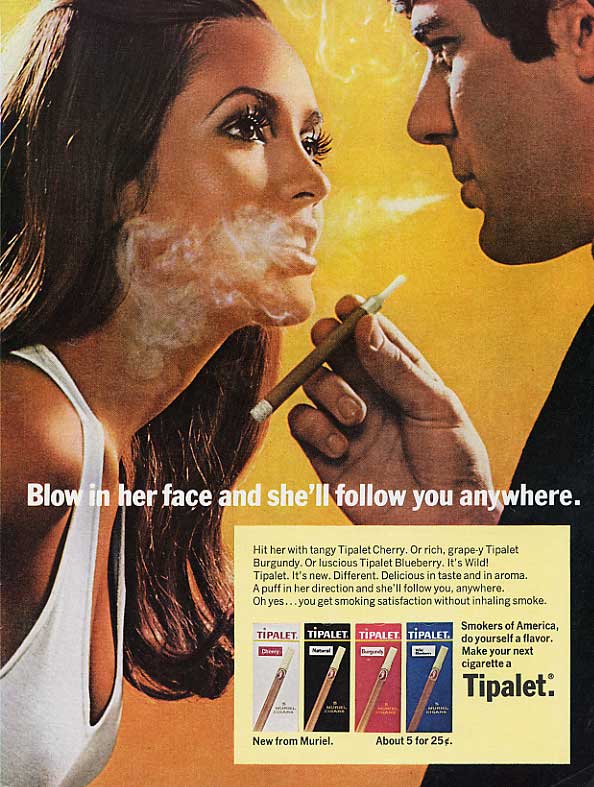 Or how about this commercial?

BS ALERT: Nice try WaxVac, but I just don’t believe that your ear vacuum is going to hurt less than a cotton swab. Here’s a great critique of this campaign – very entertaining.

SIN #2: Stating What They See – Never waste space or, more importantly, the few seconds of viewer attention, by telling them what they’re already seeing. Make sure your message builds upon the story being told in your visual instead of simply retelling it.

SIN #3: Shocking Them Silly – Humor is a great tool for getting attention and creating likeability for your brand. However, humor can quickly tip the balance of silliness or shocking to the point that punch line makes viewers forget the value proposition. Make sure humor is used in good taste, and that it produces positive emotion to associate with your brand. Don’t make viewers turn the page, turn the channel or want to poke their eyes out.

CAUTION: YOU MAY FIND THE FOLLOWING EXAMPLE TOO SHOCKING. VIEW AT YOUR OWN RISK.

SIN #4: Taking the Easy Way – Consumers are intelligent. When they pay attention to advertising they expect to be rewarded with something that provokes thought, makes them laugh or feel good. If your concept is too easy, too obvious or too expected it will fall flatter than a bad joke.

SIN #5: Punishing with Puns – Puns almost always make the ads qualify for the 90% waste bin. Why? I like the way Paul Suggett put it in his article “Don’t Ever Be Tempted to Use Puns”:

“A pun is usually followed by a groan from the people hearing it, or reading it. It’s rarely followed by raucous laughter, and it’s almost never thought of as clever or sophisticated… They’re tacky, they debase the product or service and they should be avoided at all costs.”

This commercial from diaper company, Luvs, was voted the worst ad in America in 2011. One big, bad pun:

SIN #6: Copycatting – I hate movies with predictable story lines. Likewise, consumers are turned off by ads that look like ads. They’re especially turned off by concepts that they’ve seen before. Remember, they don’t prefer to be advertised to. Don’t leave them feeling like your brand is a waste of time.

SIN #7: Ego Stroking – Many advertisers are simply too proud of themselves. They seem to think we want to see their picture and read a list of their credentials, or that we want to know they’re #1 in this or that. Don’t fall victim to ego marketing. Let the consumer perceive your greatness by how good your brand looks and how valuable your message is.

NOTE: Ego Stroking almost always leads to Spreading it Too Thick (one sin leads to another).

The interesting thing about these sins is there are always a few successful ads that get away with committing them. However, as a general rule, you’ll drastically improve the odds of an effective outcome when you weigh your creative concepts against the seven deadly sins. If nothing else, it will force you to push past the first, easy ideas and into the creative concepts that stand out, reward the viewer, and produce brand memory. I like the thought from Kenneth Cole in his book Footnotes:

“A bad ad is at best embarrassing and, at worst, damaging to the business; for all practical purposes, a mediocre ad is no better than a bad one: you define yourself as a mediocre company, compromising the relationship with your customer and worse, you spend money to do it.”